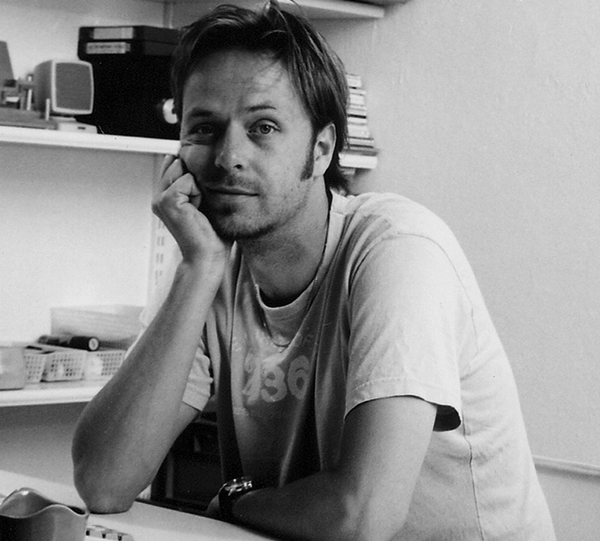 ""Thomas Bernstrand’s objects are not meant to be placed on a pedestal. They are meant to be used. Yet not in the customary manner: not as one usually uses furniture and lamps and flowerpots and coat hangers and notice boards and towel hangers and ladders and everything else he has designed. But more… intensively… You should be able to swing from Thomas’ things. Dance on them. Dismantle them. Cause they can take it. They are made to use. All designers, of course, say they would never design something simply for the sake of design. But Thomas isn’t just talk. When he comes to work in the morning, unlocking the buckled iron door of his white-painted studio – what was once a bakery –and puts his feet up on the window table and looks out at the neighbouring pool hall, tattoo studio and Asia travel agent, his thoughts are not, “What should I design today? Should I design a chair?” But instead, “Should I design something to work in, relax in, bounce in or whatever?” He thinks in terms of verbs, rather than nouns. In actions, rather than typologies. Often, what ends up on paper is purely archetypical. His work sometimes seems more deconstructed then designed, the fruitful result of everything removed during the creative process. At his best, the products are totally free of mannerisms: they could just as well have been designed by a machinist in overalls and a hairnet. A comparison, I feel, Thomas would consider high praise, for he strives after that absolute lack of pretention. I can imagine such a manner of working demands enormous self-discipline: to never draw an unnecessary line, never surrender to stylistic references. And all of this in an era when we can’t even open the morning paper without reading about the trendiest teppanyaki in town. But if the products are to be as effective as Thomas wishes, then they cannot simply stand in a corner preening themselves. To work in a public space – half of his designs are for the urban environment – they must be honest, clear, charming, humorous, personal… Qualities lacking in the stressed city, but supplied by Thomas’ work. Qualities that also describe him rather well. I tend to think that Thomas would have been an excellent actor. He is an enormously sharp-sighted observer of people, noting behaviour that goes unseen by us others: “trivialities”, “silliness”. Such as what happens at a party when the volume is turned up to the maximum. Or how teenagers treat, climb, besiege and dominate a park bench. Unlike a slightly anxious desire by many of his colleagues who become directorial and stiff, Thomas’ work encourages such disobedient behaviour. Cause they can take it. They are made to use.""