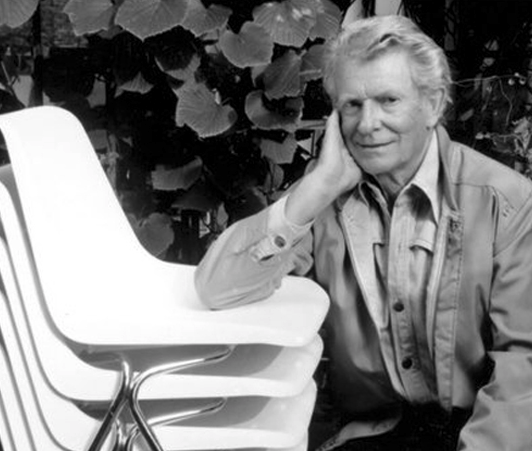 "Robin Day OBE and his wife Lucienne Day, furniture and print designers, are amongst the most acclaimed and influential British designers from the post war era, often put on a par with their American contemporaries, Charles and Ray Eames. Robin Day was born in High Wycombe in 1915, the son of a police constable. He trained as an industrial and furniture designer at the Royal College of Art in London, where he met Lucienne. Robin Day rose to fame during the 1951 Festival of Britain where he won the Chartered Society of Designers's Minerva Medal, the highest tribute the Society offers and was awarded for a lifetime achievement in the field of design. Robin Day believed in the power of modern furniture and design to uplift and make the world a better place, and right from the start of his career, he dedicated himself to the design of low-cost, ‘high tech’, mass-produced furniture."