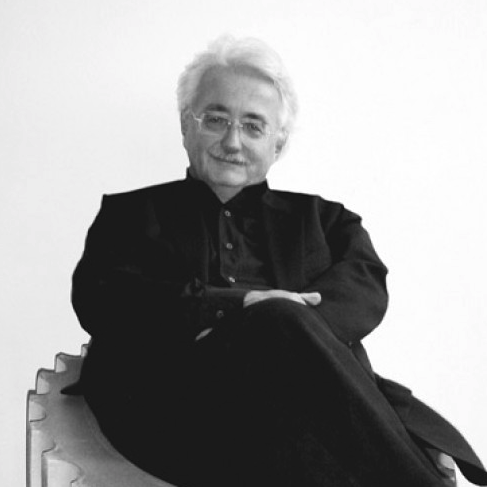 "Gianni Arnaudo graduates at the Politecnico di Torino in 1971. He started working with Studio 65, where he was one of most active cooperators between 1970 and 1975. Next to the Radical movement he participates to exhibition such as “New Domestic Italian Landscape” at the Moma in New York. Some of Studio 65 works of this period ( among them the armchair “Capitello”, Babylonia, Bocca) belong to the permanent collection of Museums such as the Denver Museum of Modern Art, the Vitra Museum of Basel, the Centre Pompidou in Paris and the Museum of Modern Art in Sidney. Among all his projects we can remind: - the Palazzo dell’Amministrazione Provinciale (Cuneo), - the shopping center with disco in Marbella (Spagna), - the Lamborghini-Contact (Montecarlo), - the offices of the Japanese Consulate (Montecarlo), - the wine shop Terre da Vino (Barolo, Cuneo), - the new airport in Cuneo, - the Museum of Capo Verde, - the industrial complex Dromont in Grinzane Cavour (CN), - the industrial complex in Santa Vittoria d’Alba (CN) - the Museum Design Hotel in the Castel of Montaldo (TO). The exposition “BigBang” in the Centre Pompidou place Gianni Arnaudo in to the most important persons that changed the world in 20th century. Now he collaborate with Poltrona Frau, Lualdi, Slide, Olivari, Gufram, Maligno, FontanaArte and FerreroLegno. Organized the exposition “Popdesign” for Turin World Design Capital 2008. Gianni Arnaudo teaches “Tecnologia Ambientale” (environmental technology) at the Architecture Faculty of Politecnico in Torino."